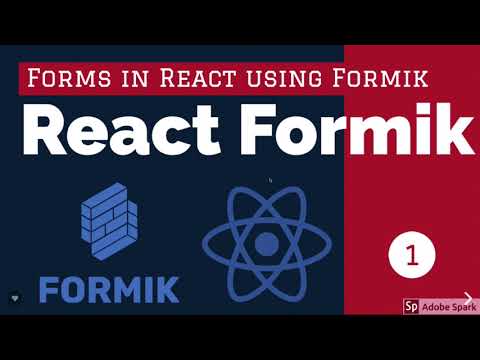 Formik is a library that helps us to write forms in React.

forms are really verbose in React. To make matters worse, most form helpers do way too much magic and often have a significant performance cost associated with them. Formik is a small library that helps you with the 3 most annoying parts:

By colocating all of the above in one place, Formik will keep things organized — making testing, refactoring, and reasoning about your forms a breeze.

(@jaredpalmer) wrote Formik while building a large internal administrative dashboard with @eonwhite. With around ~30 unique forms, it quickly became obvious that we could benefit by standardizing not just our input components but also the way in which data flowed through our forms.

By now, you might be thinking, “Why didn’t you just use Redux-Form?” Good question.

The goal of Formik is to create a scalable, performant, form helper with a minimal API that does the really really annoying stuff, and leaves the rest up to you.

Formik is compatible with React v15+ and works with ReactDOM and React Native.

You can also try before you buy with this demo of Formik on CodeSandbox.io

If you’re not using a module bundler or package manager we also have a global (“UMD”) build hosted on the unpkg.com CDN. Simply add the following

Once you’ve added this you will have access to the window.Formik.<InsertComponentName_Here> variables.

This installation/usage requires the React CDN script bundles to be on the page as well.

You can play with Formik in your web browser with these live online playgrounds.

Explore More about Formik (I [@tkssharma] have Covered everything about formik in these training sessions.